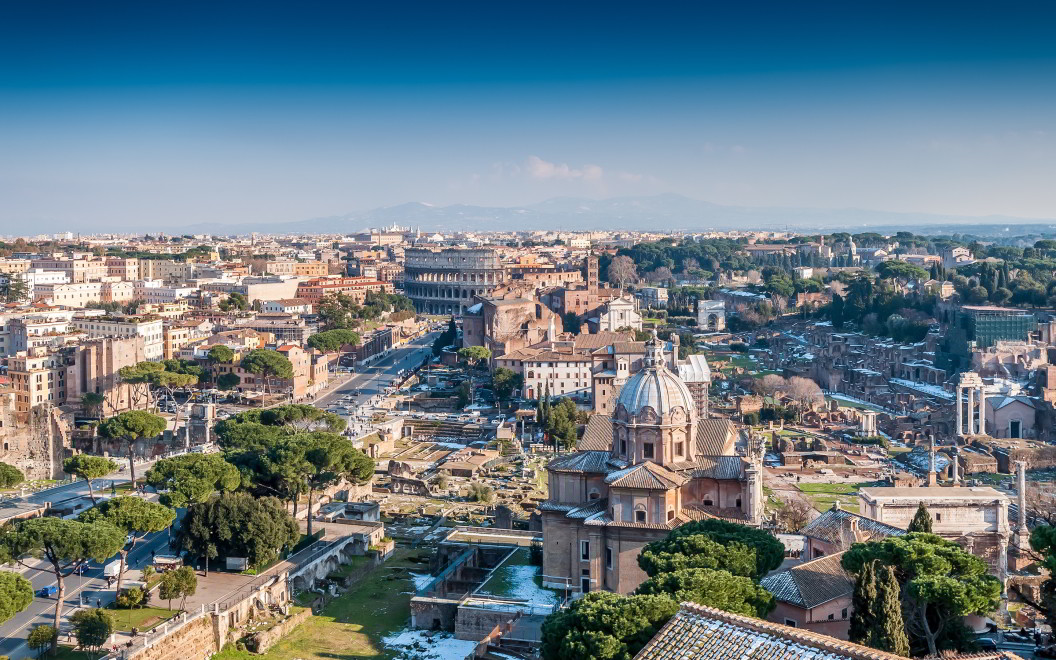 In many ways, visiting Rome feels like being transported to an epic movie set. With its ancient architectural remains, delicious food and chic nightlife, the city has a lot going for it– even if it does become crowded and congested with traffic in the summer.

Don’t be afraid to get lost. Wandering around Rome’s cobbled streets, looking up at stunning buildings is the perfect way to stumble across local markets selling delicious fruit and pastries and great street entertainers.

To get the most out of your visit, be prepared to hit the ground running. Here’s our guide to one of Europe’s great capitals. Divertiti! (Have fun!) 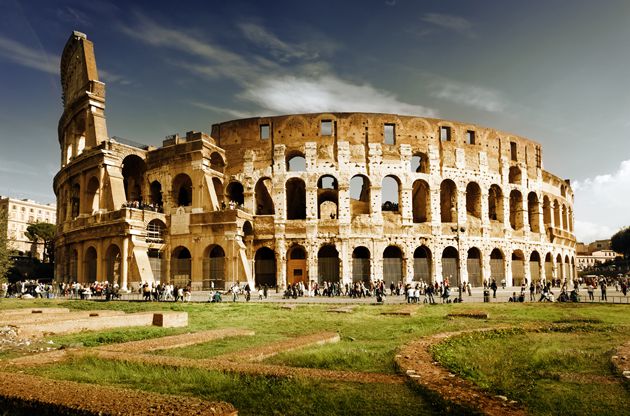 Once the site of bloody battles between slaves, prisoners, gladiators and wild animals, the Colosseum is perhaps Rome’s most thrilling attraction. Inaugurated in AD 80, this amphitheatre was built to seat up to 50,000 people looking down onto a sanded arena, where they watched mortal combats and staged animal hunts.  Concealed beneath the arena there is a complex that included cages for both animal and human combatants.Performers who disappointed the crowd were often whipped until they fought more aggressively.

The latest Colosseum restoration, in 2001, peeled back even more detail of the amphitheatre’s gory past, revealing the underground shafts through which tigers and lions emerged, via trap doors, into the arena.

In Roman times entrance to the Colosseum was free, although there were rigid seating rules designed to keep the sexes and social classes apart. The emperor and senators had ringside seats in the front rows. Women had to sit right at the back of the theatre, except for the Vestal Virgins (the six high priestesses), who had privileged places next to the emperor.

Today entrance is not free – you will need to buy a ticket, and expect a lengthy queue. Try to go early or late in the day to avoid the biggest crowds. 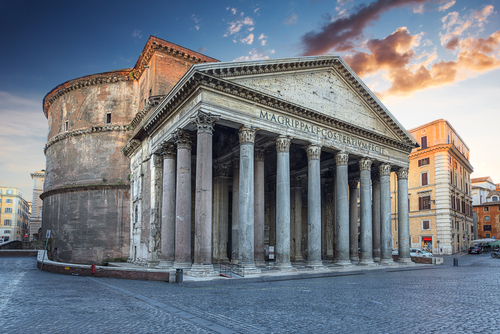 The Pantheon is the best preserved of Rome’s ancient buildings. Built in AD 119-128, by the Emperor Hadrian, it’s a temple to 12 of the most important Roman gods. The name ‘Pantheon’ is a derivation of the Greek words pan (all) and theos (god).

However, perhaps the most interesting thing about the building is its architecture, which incorporates the largest dome in the world until the 15th century. It remains the largest unreinforced concrete dome in the world today. The Pantheon’s beautiful symmetry is due to the fact that its diameter is exactly equal to its interior height of 43.3 metres. Light enters the structure through the ‘oculus’, an 8.7 metre opening in the dome that also represents a symbolic connection between the temple and the gods above it. 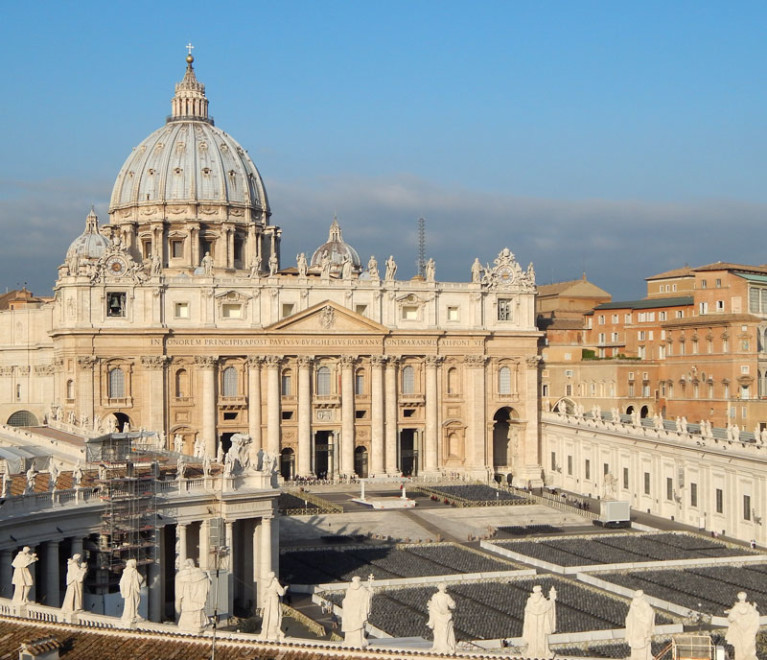 The Basilica di San Pietro is Italy’s most stunning cathedral. It contains artworks by some of the great Italian masters.

For example, in the portico, opposite the main door, there is a mosaic by Giotto (c1298). Over the altar you will find Bernini’s 29m-high baldachin (1633), an extraordinary piece of Baroque design in bronze.

Inside the basilica, in the first chapel on the right, is Michelangelo’s first major work as an artist, the Pietà (1499).  He wrote his signature across a sash on the Virgin’s chest, apparently in response to critics who accused him of being too young at 25 to have produced such a masterpiece.

Before you leave, don’t forget to kiss the big toe of Arnolfo da Cambio’s brass statue of St Peter (c1296). You can’t miss it– it’s worn down by centuries of caresses.

For a stunning view of the city, climb to the top of the basilica’s dome. You can either walk the 551 steps or take a small lift halfway up and then continue on foot. Either way, it’s a steep, narrow climb that vertigo sufferers might want to avoid. If you make it to the top however, you’ll be rewarded with rooftop views from 120m above St Peter’s Square.

The basilica attracts up to 20,000 people on a busy day, so expect queues, especially in mid-mornings and mid-afternoons. 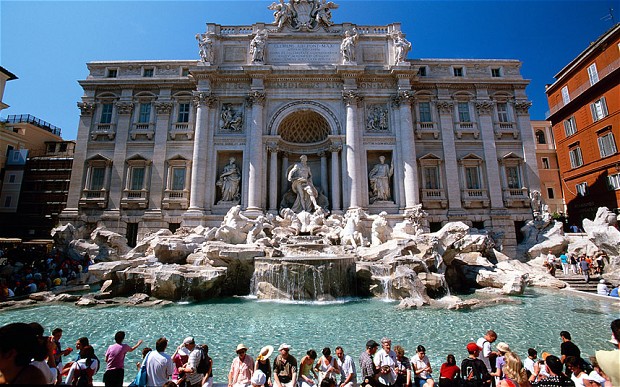 You can’t leave Rome without tossing some coins in the most famous fountain the world. As it’s been featured in films including ‘La Dolca Vita’ and ‘Elsa and Fred’, you might recognise it immediately. If you don’t, just look for a large crowd– the area around it is always packed. Oh, and by the way, you’re supposed to throw two coins in over your left shoulder: one for love and one to ensure that you return to Rome some day.

Flying her British nest to travel, Lou ended up in Melbourne, Australia, where she can be found doing digital marketing G Adventures. Her unquenchable thirst to see the world has taken her to North America, across Asia, through Europe and around Oceania: trekking, bungy jumping and skydiving on the way. 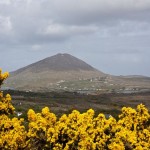 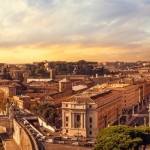